A Minnesota guy that tweets and blogs about WordPress, Apple, sports and anything else that might come to mind. » More My wife, Aleta, determined sometime this summer that this was the year our family was going to take an actual vacation. We have never done anything quite like that. Ever. Our vacations usually entail us heading up to her parents place in northern Minnesota. I love those “vacations” actually. Fishing, swimming, pontooning, relaxing around a fire, playing cards or other games, watching the sun go down and hanging out with her parents for the weekend is my kind of getaway.

Aleta’s suggestion that we head to the Badlands and the Black Hills of South Dakota for a whole week was definitely something new and different. She had traveled there as a kid, but I’ve never been close to western South Dakota. I eventually wrapped my head around the idea, we set a date and booked a hotel in Rapid City, South Dakota.

Fate jumped into the picture when my brother-in-law got married in July. His wife grew up in South Dakota and we hoped to get some vacation tips when we met her side of the family at the wedding. We got to know the grandparents at the wedding and during the party the following day. We were thrilled and surprised when they offered to let us use their cabin in the Pringle, South Dakota area.

Spending a week in a cabin just south of Wind Cave National Park with quick access to places throughout the Black Hills was more than ideal. It also meant that we would have access to a gas grill, refrigerator, fire ring and other comforts that a home could offer over a hotel. We were extremely grateful for the generous offer that was extended to our family. We thought it would be perfect.

We got up early, packed enough food to feed a small army and hit the road by 7:45 a.m. Before long, we were traveling west on Interstate 90 and smelling the sweet smell of freshly cut hay. We dropped off the road for gas in Worthington, Minnesota, and took the opportunity to eat the cold pizza we cooked the night before for lunch.

The southern route across Minnesota is generally flat and lined with fields of corn and soybeans. There were groupings of tall, white windmills lazily spinning to keep us company as we drove toward the Badlands and our eventual destination of the Black Hills. The windmills got me thinking about the impact a single might have on energy generation. I had to look it up when I got a chance.

How much electricity can one wind turbine generate?

The output of a wind turbine depends on the turbine’s size and the wind’s speed. Utility-scale wind turbines being manufactured now for the U.S. market have power ratings that range from 1.5 megawatts to 3.0 megawatts.

I would estimate that we saw over a hundred wind turbines along I-90, so that is quite impressive for passive energy generation.

The turbines slowly disappeared and we crossed into South Dakota. The eastern side of the state is very similar to Minnesota, but rolling hills started to appear as we neared the Missouri River. The scenery was a nice change of pace. I was driving on a section of highway that was new to me. Once we crossed over the river, the terrain flattened, was noticeably less green and started to look like Minnesota farmland again. There was a shift in some of the crops we observed. Sunflowers and a mysterious brown-topped plant now flanked the highway at times and became a topic of conversation. We had to look it up to finally determine that it was sorghum.

It was around Murdo, South Dakota, where our T-Mobile roaming data minutes got capped and we were officially off the data grid. Mapping our route would become difficult, our Spotify music disappeared, access to email evaporated and the kids’ ability to jump on our iPhone’s hotspot went away. We were officially on vacation! Our boys, however, caught a break at the Murdo gas station when they found out they had free Wi-Fi. They happily gobbled up the opportunity to hop online once more while I fueled up the Expedition.

Onward we went and we crept closer to the Badlands. You can see parts of it from I-90 and we opted to travel through the Badlands on the way to the Black Hills. Once we reached Exit 131, we turned south to travel along the Badlands Loop State Scenic Byway and enter the Badlands National Park. No sooner had we paid the entrance fee, we were already parked at the Big Badlands Overlook and out walking to take in the inspiring view. The Big Badlands Overlook is a really impressive way start to our trip, although Nick spotted the sign that warned about rattlesnakes and he suddenly became a bit cautious. Once we were done at the overlook, we drove further down the road to Door Trail. Door Trail allowed us to walk through the Badlands Wall and see the sediment layered spires and canyons. You could clearly see the impact that water had on slicing through the area. The formations were stunning. Zack, Sam and I walked the trail, while Aleta hung back with Nick, away from the rattlesnakes.

After we return from our walk, we started driving again and stopped periodically. We hit the Fossil Exhibit Trail, the White River Valley Overlook, Burns Basin Overlook and Pinnacles Overlook. At each stop, we were treated with something new and engaging. There were plenty of breathtaking views with rich colors as the sun continued to drift downward to the horizon. 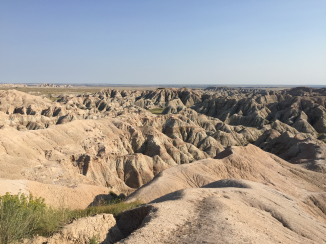 Aleta and the boys taking in the view in the Badlands National Park, Conata, United States.

We arrived at Wall Drug at 6:15 p.m. and walked around the place, refilling our glass and aluminum water containers. The kids spent a little of their own money and then we were off. I can now say I’ve been to Wall Drug.

Once we finally extracted ourselves, we hit the road again and got back on I-90. We were unable to appreciate entering the Black Hills because we travelled along Highway 385 at night. We finally reached Pringle by 10 p.m. and found the cabin soon after. We let ourselves in and eventually got ourselves squared away. I think we were all finally sleeping by midnight. Long day!

A Minnesota guy that tweets and blogs about WordPress, Apple, sports and anything else that might come to mind. View all posts by Darrell Schulte

The latest news on WordPress.com and the WordPress community.